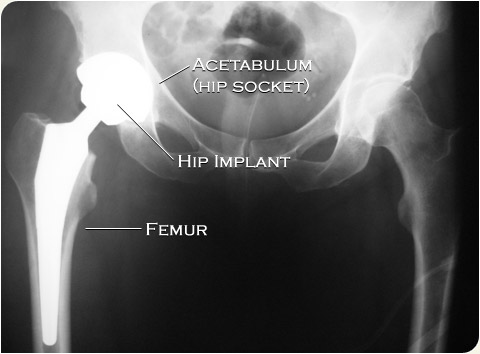 Total hip replacement (THR) represents one of the most significant advances in orthopaedic surgery in the latter half of the 20th century. It has alleviated the pain and improved the mobility of hundreds of thousands of patients crippled with arthritis of the hip. The UK National Joint Registry recorded 42,769 THRs in 2004. This figure has risen so that in 2016 and 2017 more than 91,000 THRs were performed. A similar picture of an increasing number of THRs is replicated around the world.

The increased prevalence of hip replacement has been unhappily accompanied by an increased incidence of failure. Some of these failures result from the fact that the THR has reached its natural end of life, but others are the result of early implant failure. Re–operation and revision of a failed replacement is a more complex procedure, with a higher risk of complication. We should, therefore, do everything possible to minimise the risk of failure.

Cemented and Cementless Prostheses - The Implants

There are two major types of artificial hip joint. 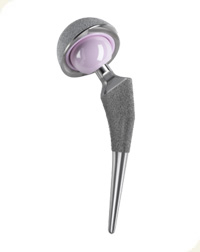 The outer aspect of the metal shell is designed so that living bone will adhere to an irregular, porous, mesh or beaded surface.

The inner liner acts as the bearing surface which may be made of different materials such as ceramic, metal or plastic.

The type of plastic used is very tough, highly crossed linked polyethylene and the wear properties are superior to conventional polyethylene. Metal on metal or ceramic on ceramic bearing surfaces may also be used as an alternative. These bearing surfaces are exceptionally smooth and have a low coefficient of friction. The frictional forces are dependant on the surface roughness and the chemical composition of the material. Technological advances in bearing materials have already reduced wear, which should result in improved longevity of the hip joint.

The femoral component is made up of a metal stem with a metal or ceramic ball which is inserted on a morse taper at the top of the stem. A cemented prosthesis is held in place by a type of acrylic cement that acts as a grout, filling the bone marrow space between the metal stem and the bone. A cementless prosthesis has a fine mesh, beaded or porous surface area which abuts against living bone.

In the cemented version of an artificial hip, a special self–curing cement is used to fix the acetabular component to the bone. In the cementless version, the metal shell is simply held in place by the tightness of the fit, or with screws. An inner liner is then inserted into the outer metal shell.

There are no absolute indications for THR and the final decision always remains with the patient. The surgeon can assist by advising the patient of the implications, expectations and possible complications.

What then are the factors that will influence the decision on when to operate on an arthritic hip?

Pain and loss of function are two of the most important aspects.

Pain is a subjective factor and is very difficult to quantify. Different people have different pain thresholds and the perception of pain in any one individual will vary according to their general sense of well being. We often use a pain analogue scale to try and quantify pain but even this assessment can vary with the patient’s state of mind.

Since it is difficult to establish an absolute scale of pain, one must respond to the patient’s own perception of pain. This is usually best reflected by the number of painkilling tablets or analgesics that are taken each day.

In some cases the decision is easy. The pain may be so severe that the patient can hardly walk or is frequently awakened at night. If this disruptive pain cannot be controlled by other measures surgery is clearly indicated.

Loss of function is the second major factor that needs to be assessed.

Once again there is no absolute guideline as this is a very individual interpretation based on the patient’s own expectations of mobility and function. For convenience and as a measure of function, the surgeon will record the patient's ability to put on socks, cut toe nails, go up and down stairs, get in and out of a car etcetera. These indicators assess loss of movement but do not reflect the extent to which the patient’s quality of life is compromised by their limitations.

The assessment of pain and loss of function is a very relative and individual assessment. It is thus the extent to which expectations in life are compromised by the disability of an arthritic hip which will determine the need for surgery.

The age at which a patient qualifies for a THR presents another contentious issue. Previously the procedure was reserved for elderly patients. We know that over 80% of implants will survive 20 years or more in the elderly. The same is not true when new hips are inserted into younger patients. The increased incidence of early failure in the young patient can probably be ascribed to a much higher activity profile.

Arthritis in younger and older patients

Most younger patients with severe arthritis of the hip demand a joint that is near normal. They are not prepared to accept alternatives which involve major surgical procedures but which will provide unpredictable results. In discussing the options with the younger patient, one must allow for at least one revision in the future if THR is recommended. It is normal that at the time of presentation the young patient requires full function because they are often fully immersed in family and professional life, as well as often participating in some form of sport or exercise regime.

When several joints are involved and the disease is crippling, even youth is no contra–indication to a THR. Multiple arthritic joints in juvenile chronic arthritis patients may result in a teenager being confined to a bed or a wheelchair. Dependence on other people is depressing, demoralising and life-style limiting. Multiple joint replacements may only provide limited mobility but will result in an enormous improvement in the quality of life.

Likewise, multiple joints may often be involved in adult patients with inflammatory arthritis. They learn to live and function with a surprising degree of deformity and disability. In this setting they are able to define the main problem area and identify the loss of function, which to them represents unacceptable disability.

Therefore each patient’s requirements need to be carefully assessed on their own merits and it is the patient who makes the final decision.

There are four approaches to the hip and access takes advantage of the muscular planes surrounding the hip joint:

Anterior (front) Approach
The anterior approach has been revitalized for minimally invasive surgery (MIS) — a procedure that Evert Smith specialises in that can significantly reduce recovery time — when performing a THR.
Two lateral (side) Approaches
The anterolateral approach is the most commonly used approach for THR.
The direct lateral approach exposes the hip joint by detaching the upper end of the thigh bone (the greater trochanter).

Posterior (rear) Approach
The posterior approach is the second most common approach when performing a total hip replacement.

Once you have been anaesthetised and positioned on the operating table the skin is cleaned and the surgical site is draped. Surgery begins with an incision over the hip joint using either an anterior, lateral or posterior approach. Next the ligaments and muscles are separated to allow the surgeon access to the bones of the hip joint.

To begin replacing the femoral head, special rasps are used to shape and hollow out the femur to the exact shape of the metal stem of the femoral component. A trial femoral component shaft is placed in the marrow canal down the centre of the femur and checked for correct fit. The trial hip reconstruction is checked for range of motion, muscle tension and stability. The length of the neck of the femoral component can be altered to make sure that the leg lengths are equivalent. Every effort is made to maintain equivalent leg lengths. The range of hip movement can be tested. Once the correctly sized implant has been determined the definitive implant is inserted and fixed to the femur.

In the cemented version of the femoral component, the femoral canal is rasped to a size slightly larger than the femoral stem, then acrylic cement is used to bond the metal stem to the bone.

In the cementless version of femoral component, the stem is held in place by the tightness of the fit into the bone (similar to the friction that holds a nail driven into a hole drilled into a wooden board with a slightly smaller diameter than the nail). The definitive femoral head is attached to the femoral stem and is relocated into the acetabular socket. The muscles, ligaments and skin are closed and the incision is covered with a sterile dressing.

On the first day most patients will have had their intravenous drip removed.

The physiotherapist will see you after surgery and will begin with muscle strengthening and stretching exercises. You will be taught the safe way of getting in and out of bed.

You will learn how to use a support with the physiotherapist and you will be encouraged to take exercise on a regular basis. By the time of discharge, from around 3 to 7 days, you will be able to perform all activities unassisted.

You will be able to go home in a car and it may be best to have some help when you return home.

Walking is good for your new hip replacement and excellent exercise. Non–impact sports are advisable and these include swimming, cycling and golf. Your functional ability will improve rapidly week by week until you are able to drive a car at 6 weeks.