HOME / BLOG / Arthroplasty for Arthritis Charity at The Ritz!

Arthroplasty for Arthritis Charity at The Ritz! 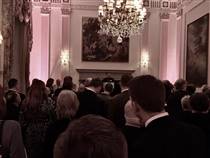 I am no stranger to standing on the podium in the line of my work, but this time it was at my Charity’s latest fund raiser held at The Ritz Hotel in London. The plush setting of The Music Room was where a champagne reception and auction took place to raise funds for Arthroplasty for Arthritis, the charity I founded in 1994. The charity has gone from strength to strength in recent years as it funds valuable research into musculoskeletal disorders.

Due to the success of a previous charity function in 2017, Arthroplasty for Arthritis Charity once again joined forces with The Royal Academy of Culinary Arts Adopt a School Trust. President of RACA, Brian Turner, acted as auctioneer for the superb range of prizes donated by the charity's sponsors and supporters.

A host of celebrities shared the evening with the charity. Along with many other loyal charity supporters. Wayne Sleep, one of the charity’s Patrons was there as well as BBC Radio 4 Woman’s Hour host Dame Jenni Murray.

It was an amazing charity event brought about by hard work, team effort and friendship and the proceeds of the auction and raffle will aid and advance research.