E Poly is a massive advance in polyethylene technology.

Conventional polyethylene (plastic) has good mechanical properties and has been used as the bearing surface for hip replacements for several decades. Wear of these polyethylene liners by the metal femoral head creates tiny particles. This debris triggers bone resorption (or osteolysis). The plastic used in total hip replacements is prone to oxidation due to the presence of free radicals and this further accelerates the wear problem.

Poly Two carbon fibre reinforcement plastic was used in the early 1980’s. Hylamer polyethylene, with increased crystallinity and stiffness, was introduced in 1991. Both types failed as a bearing surface when used in patients.

Cross-linked polyethylene reduces wear but has poor mechanical properties. First generation examples are Marathon (J&J DePuy) and Crossfire (Stryker Howmedica Osteonics). In the latest cross-linked polyethylenes, such as X3HXLPE (Stryker Howmedica Osteonics), oxidation is reduced by the use of low dose irradiation and annealing of the plastic material to remove free radicals. 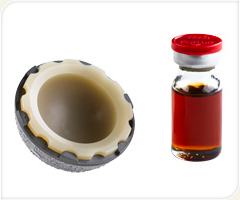 E-Poly is a breakthrough technology. It is processed below melting temperature and irradiated. Vitamin E (α tocopherol), which is a naturally occurring antioxidant, is infused into the plastic, and stabilises free radicals by donating a hydrogen atom from the –OH groups; free radicals from the plastic are transferred to the vitamin chemical structure.

This chemical interaction dramatically reduces the wear rate by up to ten fold when compared with conventional polyethylene. Laboratory trials have confirmed the excellent wear characteristics and E-Poly is being used for bearing surfaces in hip replacements. 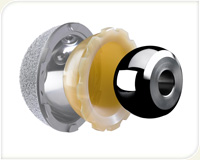 The massive reduction in wear is a giant step forward in controlling one of the most important failure mechanisms in joint replacements and is particularly important for active patients.