This page contains information about hip implants and their acetabular and femoral components.

Hip implants (or prosthesis) consist of the components that make up an artificial hip joint.

There are two major types of artificial hip joint: cemented prostheses and uncemented or cementless prostheses.

The acetabular cup is fixed in the socket by a type of acrylic cement that acts as a grout. It can be made of plastic, or it may comprise of an outer metal shell with an inner liner.

The outer aspect of the metal shell is designed so that living bone will adhere to an irregular, porous, mesh or beaded surface. The bone grows into the uneven depressions of the porous surface — this is known as porous in–growth.

Surface coatings such as hydroxyapatite (HA), which normally constitutes 70% of the dry weight of bone, are often added to the outer metal shell to enhance this bone ingrowth. HA coatings achieve a strong bond with living bone in a relatively short period of time.

The inner liner, which acts as the bearing surface, may be made of different materials such as metal, ceramic or plastic. The type of plastic used is resilient (ultra high density polyethylene), but it is the Achilles heel of the operation, as particulate polyethylene debris is produced. This induces bone resorption (osteolysis), which ultimately leads to failure of the implant. Newer cross linked polyethylene provides a low friction bearing surface but is stiffer and more resilient than the original polyethylene and therefore less resorption occurs.

Metal on metal or ceramic on ceramic bearing surfaces may also be used as an alternative. 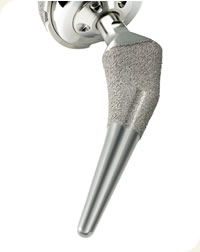 The femoral component is made up of a metal stem with a metal or ceramic ball which is inserted on a morse taper at the top of the stem. A cemented stem is held in place by a type of acrylic cement that acts as a grout, filling the bone marrow space between the metal stem and the bone.

A cementless prosthesis has a fine mesh, beaded or porous surface which abuts against living bone. Bone grows into these uneven depressions on the surface of the implant. HA coating may also be applied to the irregular surface of cementless stems.