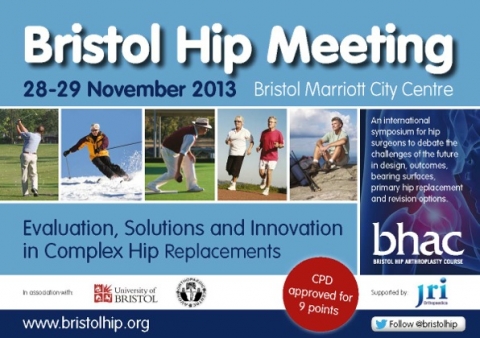 The 2013 meeting was sponsored by our keynote supporters:

The 10th Anniversary Bristol Hip Meeting was once again a resounding success where a faculty of twenty-six internationally recognised orthopaedic surgeons shared their knowledge of Evaluation, Solutions and Innovation in Complex Hip Replacements. The reputation for excellence was affirmed by the highly favourable feedback from the course delegates who enjoyed the style of the meeting as it encourages contribution from everyone by employing discussion and debate to interrogate the information presented. The combined facilities available at the conference venue provided a seamless two-day event where the Conference Dinner held in the hotel’s Conservatory Restaurant was a lively and enjoyable occasion.

The opening session was moderated by me and dedicated to ‘Quality Assurance’. Ashley Blom showed the significance of the function of the National Joint Registry for England, Wales and Northern Ireland (NJR), which now possess a data platform capable of identifying a diverse range of factors that affect joint replacement outcomes. Ashley demonstrated the reduction in mortality during the 90-days following total hip replacement (THR) for osteoarthritis (OA) between 2003 and 2011 and highlighted strategies that can reduce this still further. I presented on the challenge afoot for healthcare economics as a perceived need to cut costs meets the need for investment to advance joint replacement technologies. These issues must be managed in the face of changing world demographics where an increasing and ageing population and an obesity epidemic place extra burden on worldwide health services.

Keith Tucker enlightened the audience on the structure and function of the newly established Beyond Compliance system (BC) (Beyond the compliance of the CE Mark) established in the wake of the UK’s failed surveillance systems associated with metal on metal (MoM) bearings; and Peter McLardy-Smith expressed concern about the NJR’s initiative aimed at identifying ‘outlier’ surgeons. Peter showed that ‘standardisation’ of the evaluation criteria fails to engage the full complexity and case mix of the surgeries, which can result in a false negative evaluation. Obesity is now at about 25% in the UK and David Woodnutt demonstrated the influence of body mass index (BMI) as a predictor for primary hip replacement at a younger age, higher infection rate, malpositioning of the acetabular component, dislocation and increased hospital stay.

Tony Ward moderated ‘Patient Outcomes Joint Preservation’ which was opened by David Woodnutt who illustrated the value of the Kaplan Meier curve in providing a pictorial survival of the hard end point of revision and death. Justin Cobb showed that laboratory performed gait analysis identified a more natural gait with resurfacing arthroplasty (RA) than THR but emphasised that further investigation is necessary. David Beverland highlighted the challenge to find an implant that can survive >20 years, especially for patients <50 years who account for 4% of UK THR cases. Johan Witt presented peri-acetabular osteotomy demonstrating the value of this procedure and enlightened us to certain conditions that predispose to early arthritis. However, not all dysplasias develop OA. He presented findings to show that no patient with untreated dysplasia reaches age 65 with a well-functioning hip with a centre edge angle of <16 degrees.

Our Keynote lecture was given by Henrik Malchau who discussed the challenges of THR in the health systems of the United States and Europe. The pitfalls of early adoption of new implant technologies were presented and he advocated step-wise rather than chaotic introduction. Public reporting of outcomes was felt to be the single most important step in accountability for healthcare systems. Henrik highlighted the healthcare savings that could be achieved if the USA introduced a central register as this would facilitate unbiased evaluation of outcomes.

‘Primary THR’ was moderated by Robert Spencer and Luigi Zagra showed how stem selection and shortening osteotomy in developmental dysplasia of the hip (DDH) was dependent on bone shape, bone quality and limb deformity. The benefits of cementless implants with a modular distal loading ‘Wagner’ like femoral component and an oblique subtrochanteric osteotomy were presented. Difficulties associated with acetabular orientation was presented by David Beverland who demonstrated that the transverse acetabular ligament could be used as a direction finder for positioning the cup at surgery; while Mazhar Tokgozoglu delivered some ‘tricks’ to orientate the acetabular cup in DDH. Wim Schreuers presented exceptional outcomes in acetabular reconstruction using impaction grafting, support cages and screws in cemented THR in young patients.

Lessons learned from experience with the Corail from David Beverland indicated the importance of pre-operative templating. Caution should be applied in patients with a narrow femoral canal and thin cortices but this is not contraindicated and a smaller stem in male patients was not recommended. Excellent results were shown with use of a collar, especially with hard on hard bearings.

The radiographic forum was orchestrated by Mahool Acharya and Sanchit Mehendale and proved to be as controversial and lively as ever.

Richie Gill moderated the session on ‘Bearings and New Technologies MoM – Dealing with it’. Jeremy Latham’s talk on revision of mixed MoM large head THR identified the drawback of using different metals at the head/trunnion junction and problems of trunnion corrosion were confirmed. Failure of RA was not as aggressive as large head metal on metal (LHMoM) THRs. Richard Cook’s talk on trunnionosis discussed all features of taper design and treatment; impaction technique and use of large heads to affect the torque and increase the horizontal leaver arm.

Andoni Toms message was that Magnetic resonance imaging (MARS) is the ultimate diagnostic tool for ARMD because it can exclude infection, and George Grammatopoulos linked the spectrum of the pathogenesis of pseudotumours to the histological features of high wear. Duncan Whitwell presented on the Management of the patient with severe ARMD, supporting the literature that indicates surveillance and early revision are the cornerstones to treatment.

Discussion on the ‘class’ effect of MoM bearing surfaces in Ronan Treacey’s talk highlighted the differences between RA and LHMoM hip replacement. It was felt that the taper design made the difference in these two designs and that the limitation remained the taper junction. The Kaplan Meier survival curve showed the BHR to have 100% survival at 14 years in males <50 years with OA. Discussion of the problems with MoM bearings indicated that mortality is higher with cemented THR as compared to MoM RA. Luigi Zagra offered the rationale for the use of large head ceramic bearings where he presented a collaborative mid-term study that showed good results.

The penultimate session ‘Strategies for the Infected Hip’ was moderated by Ashley Blom where the single and two-stage exchanges were debated. Debridement, antibiotic and implant retention (DAIR) was explored to discuss appropriate management and contraindications of implant retention.

A multitude of technologies and outcomes for management of revision hip replacements were discussed and debated in the final session ‘Revision Hip Replacement’ moderated by me. Luigi Zagra advocated the use of CoC bearings in active, young patients at revision and discussed techniques and problems for ceramic liner insertion. Wim Schreurs presented the long-term success of impaction bone grafting of the acetabulum by the originators to have a 72% survival rate, but highlighted specific problems where bone defects were severe. Mazhar Tokgozoglu evaluated massive proximal femoral bone loss with the ‘Paprosky Classification’ and showed that the new generation of implants offers surgeons improved fixation so that soft tissue attachment and stemmed fixation can now be addressed.

The indications and technique for bulk strut grafting for revision of the femur was discussed by Jeremy Latham who considers the use of strut grafts to be dependent on graft size and fixation and he stressed that this technique remains an important part of the armamentarium for revision surgeons. Fares Haddad talked on modular femoral components, which have been shown to bridge the gap between relatively simple problems and the more complex situations in revision of the femur. Improved fixation, leg length and component subsidence has been achieved with advanced designs of porous coated stems. 80% of cases were shown to be successful with a cylindrical porous coated stem.

Cage versus trabecular metal augments in relation to the more historical cup cage designs were discussed by Duncan Whitwell. The literature suggests that trabecular metal provides options to address the majority of acetabular defects. Duncan cautioned the audience that highly experienced surgeons only should approach extreme revision cases.

The highly positive delegate feedback has reinforced the importance and value of this hip course and we look forward to advancing the knowledge in hip replacement with our course in 2014.

I am eager to express my gratitude to Jri Orthopaedics and our other sponsors for supporting the meeting. My thanks also go to David Penford of Clockwork Marketing and Events and all those who worked behind the scenes to make the 10th Anniversary Conference such a grand success.