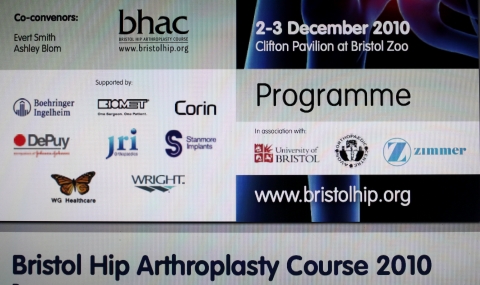 Despite four of the invited faculty being snowed in and therefore unable to attend, this year’s meeting was a resounding success and was extremely well received by both faculty and delegates.

I would like to say a big thank you to Alun John who so graciously stood in at the 11th hour and presented on Large Head Metal on Metal Hip Implants associated with adverse tissue reactions.

The key note speaker this year was Professor Ian Clarke from DARF, Los Angeles who presented the latest volumetric wear data, contrasting the small diameter Metasul implant from Europe with the latest data on large diameter Metal on Metal (MoM) total hip arthroplasties from the USA.

Ian expressed his intense surprise at learning that big ball MoM total hip replacements were being ‘abandoned’ by the surgeons in the UK. On a ‘show of hands’ not one meeting attendee is using this form of hip replacement. This year’s Bristol Implant meeting clearly identified surgeons’ concerns with MoM bearings, originally thought to be impacting only on the resurfacing type of arthroplasty. However, the faculty interactions clearly demonstrated that a significant problem, which has yet to be clearly established, is currently emerging for the large diameter MoM total hip arthroplasties. Such timely warnings by the UK surgeons to Professor Ian Clarke were appreciated, given that he is due to present his overview of MoM bearings to the US Food and Drug Administration (FDA) on December 13th.

He also commented that he was pleased to see continuing excellent results for cemented hip replacements in the UK, as well as UK surgeons embracing ceramic on ceramic bearing surfaces, which is not the case in the USA.

The session Pre-arthroplasty – Arthroscopic and Open Procedures clearly identified that these surgeons perform technically demanding surgery. The jury is still out as to whether these procedures impact on the natural development of arthritis in the hip and the meeting highlighted that there was a lack of evidence-based medicine in this field of orthopaedics.

I would like to express my thanks to David Penford, Clockwork Marketing and Events for the smooth and efficient organization of this meeting.