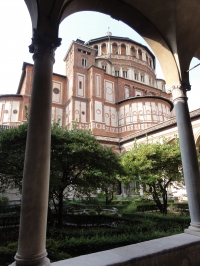 This was my first meeting as the UK representative for the European Hip Society, which was held in the Marriott Hotel in the magnificent city of Milan.

At the early morning meeting on the first day, I was welcomed as a newly fledged member to the European Hip Society Scientific Committee. One of our tasks was to judge the 10 best abstracts, which were to be presented in the Award Session on Thursday 20 September.

The attendance was at an all time high, with the United Kingdom delivering 20% of the presentations.

Alongside Antonio Campacci from Verona, I chaired the session on Hip Resurfacing – a very topical issue.

In addition to my Chairman and administrative duties, I presented on the following topics:

Ceramic on ceramic squeaking: is it an issue?

The 15 degree face-changing acetabular cup – solution for the ‘shallow acetabulum.’

Wear in small-diameter versus large-diameter mom bearings. Novel explant and Tribological comparisons.The latter was well received by the delegates and general orthopaedic fraternity alike, and stimulated much interest and discussion.

Finally my congratulations go to Professor Luigi Zagra, the President of the European Hip Society, on a highly successful and thoroughly enjoyable meeting.

I look forward to seeing him again at my Bristol Hip Arthroplasty Course in November.