Metal on metal is a tough self polishing hard on hard bearing surface. 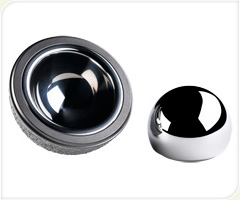 The bearing surface is all important.

The hard metal on metal (MoM) bearing surface is a tough wearing surface for total hip and resurfacing replacements. It is self-repairing because it is polished. The metallurgy is important. Most Cobalt-Chromium bearing surfaces have high carbon content. Lubrication reduces friction, which reduces wear. Optimum joint motion is achieved with fluid-film lubrication. The friction is influenced by the fluid film thickness, the roughness of the bearing surfaces and the chemical composition of the material and is dependent on the load across the joint, speed of joint movement and the viscosity of the synovial fluid. Given an optimum clearance between the liner and the ball, the steady-state wear rate of metal surfaces is about 5 microns a year, following the initial run in period. By comparison, conventional polyethylene liner and metal head couples wear at a rate of about 200 microns a year. 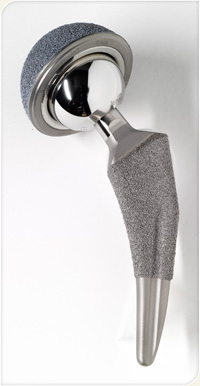 In 1951, George McKee and John Watson-Farrar designed a MoM total hip arthroplasty. The first generation MoM bearing articulations such as the McKee-Farrar, Huggler, Sivash and Ring prostheses had high failure rates due to poor manufacturing and loosening. However, it was known that MoM hip replacements caused little bone reaction.

1989 saw a new era in resurfacing hip arthroplasty (RA). Modern hip resurfacing designs utilise the concept of MoM bearing couples. This design development occurred as it had become clear from the failures of the first generation RAs, that conventional polyethylene could not be used as the bearing surface, because the large femoral head resulted in excessive volumetric wear, increased polyethylene debris and osteolysis. The first new procedure was performed in February 1991, and further design adjustments and improvements were made over the next three years.

Between 2003, when UK National Joint Registry (NJR) records began, and December 2015, a total of 40,154 MoM RAs were performed in the UK. This represents 4% of the total number of hip replacements performed in the UK (NJR for England, Wales, Northern Ireland and the Isle of Man 15th Annual Report, page 101). However, use of MoM RA has now virtually ceased in the UK and throughout the world.

Although the new millennium saw an increase in the use of big head technology, large head MoM total hip replacement (THR) has also decreased in popularity. Manufacturers utilised theoretical as well as in vitro evidence to predict that large head MoM articulations have good fluid film lubrication and therefore benefit from even lower wear rates.

The metal particles produced through wear are smaller (22-90 nanometres) and are more numerous than polyethylene particles. The shape of these metal particles typically tends to be oval or round with very few needle forms.

Increased wear can occur with impingement, increased cup inclination and excessively large or small diametrial clearance. The presence of a peri-vascular lymphocytic infiltrate around MoM THR and RA, is thought to be due to a delayed hypersensitivity reaction (Type IV) to the metal. The tissue/histological features are known as ALVAL (acute lymphocytic vasculitis and associated lesions). The metal ions have been found in the lymphatic system and in numerous organs, and are also known to cross the placenta. High levels of metals such as Cobalt, Chromium and Nickel in the human body are thought to be potentially toxic. To date, no direct causal link with cancer has been demonstrated in patients with MoM implants, although the issue of potential carcinogenesis remains a concern.

On a 'show of hands' at the Bristol Hip Arthroplasty Course in December 2010 rit was noted that big ball MoM THR was being 'abandoned' by surgeons as not a single delegate was using this type of hip replacement. The meeting clearly identified surgeons' concerns with MoM bearings, originally thought to be affecting only the resurfacing type of arthroplasty. However, faculty interaction clearly demonstrated that there was a significant problem with all MoM replacements.

At the British Hip Society Conference (BHS) in March 2011, MoM bearing surfaces were the focal topic. In a session on large head MoM THR, several units presented audited short to mid-term results. While several different brands displayed poor survival rates, the ASR XL dominated the scene. This device was withdrawn from the market and following adverse results from other brands, many other manufacturers followed suit. In a session on large head MoM THR, research was presented showing higher than anticipated early failure rates. This ranged from a 21% revision rate at 4 years, to a 49% revision rate at 6 years for the ASR XL device. Other devices indicated high revision rates of around 12-15% at 5 years. As with the RA group, increased wear of the MoM bearing surface was also noted. However, wear and/or corrosion has now also been identified at the trunnion-taper junction between the metal head and the stem.

The Medicines and Products Healthcare Regulatory Agency (MHRA) released the first in a series of medical device alerts on 22 April 2010. Medical Device Alert (MDA/2010/33 identified that in the revision of RA implants, soft tissue reactions were noted, which may be associated with unexplained hip pain. The MHRA set up a Joint Working Group to study the association between MoM hip replacement and soft tissue injury, as well as to produce advise and guidance for the Health Service based on the results. Regular Medical Device Alerts have subsequently been issued updating advice to assist in the management and early detection of soft tissue reactions in patients implanted with MoM hip replacements.

Patients that present with pain should be investigated appropriately. Radiographs may show loosening and osteolysis. Ultrasound and MRI scans may show fluid collections, as well as cystic and/or solid masses. Cobalt and Chromium ions may be elevated. The use of large diameter MoM bearings in primary THR should be carefully considered and possibly avoided.

Revision procedures can be complicated if there is significant soft tissue damage and this may require specialist reconstruction techniques.

The BHS, NJR, British Orthopaedic Association (BOA) and the MHRA continue to monitor the outcome of all MoM bearing THR and RA.