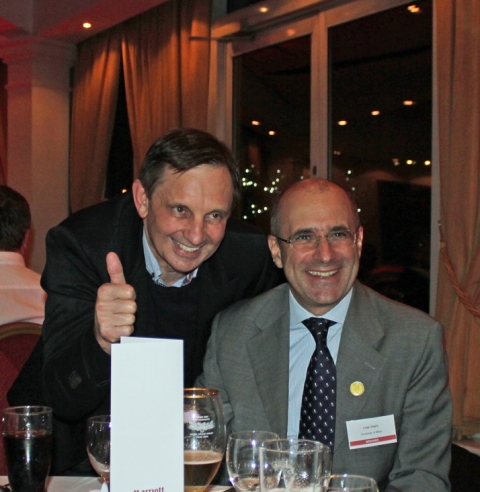 The 2012 meeting was an immense success with an overwhelming response by both faculty and delegates. The boom in participant numbers this year meant that we were able to acquire a larger symposium room, which incorporated an area for product manufacturer stands and refreshments.

This is the second year that the meeting has been successfully held at The Bristol Marriott Hotel, City Centre. Easy conference participation is enabled here, where accommodation and conference facilities are combined, and the Conference Dinner was held on Thursday evening in the hotel’s Conservatory Restaurant.

After assuming responsibility for the Debates about Hip Replacement when John Newman retired from the role as Course Co-ordinator, the name of the meeting was changed to the Bristol Hip Arthroplasty Course (bhac) in 2003. Despite the change, the course has maintained its own unique style, which is to discuss, question and debate issues relating to hip joint surgery and hip arthroplasty.

I moderated the opening session ‘Assessing our outcomes’. Rudolf Poolman provided an interesting delivery on evidence-based medicine with a critical appraisal of the orthopaedic literature. He also discussed the validity of publications and advanced guidance on how to choose accurate outcome measures to provide a conclusion. David Woodnutt presented a mathematical analysis for survival curves and showed how analysis can be skewed and adjusted to provide the orthopaedic community with different outcomes. The theme continued as Gerold Labek reminded us that registry data is a tool, the outcome of which is dependent on how it is utilised.

Peter Howard addressed the outcomes of different implants from National Joint Registry of England and Wales data. Once again, it was confirmed that metal on metal hip replacements were faring worse than all other categories of total hip replacement. He also noted that metal on metal, as a bearing surface, had now almost been eliminated in orthopaedic practice in the United Kingdom.

In the second session ‘Modularity and Interfaces’, the contrast between the irony that aeroplanes were built to fail, whereas hip implant designers and manufacturers aim to provide a total hip replacement or resurfacing hip arthroplasty for the lifetime of the patient, was not lost on the audience. Tribology of bearings and interfaces and big head technology was presented by Michael Morlock. He debated the issues relating to wear damage, while Gordon Blunn gave a discourse on optimising modular interfaces and the failure of head/neck junctions in implants, given that such modular implants are in common use throughout the world. It was identified that modular interfaces would be the next significant issue to be addressed by the orthopaedic community at large.

Robert Spencer moderated the third session on ‘Treatment in Younger Adults’. Marcus Bankes presented on the London experience of peri-acetabular osteotomies and gave an excellent detailed interpretation of radiographs. Fares Haddad answered the question whether femoro-acetabular impingement is resolved by hip arthroscopy. Theo Karachalios discussed his approach to the strategy and management of congenital hip disease.

The fourth session ‘Replacing the Injured Hip’ was moderated by Tony Ward. The shift in management of fracture neck of femur and the advances in this area by performing a total hip replacement rather than a monoblock or bipolar hip replacement, were noted by Tim Chesser. Fares Haddad identified the issues relating to peri-prosthetic fractures and highlighted a significant increase in this type of fracture given the advancing age of the population and the utilisation of cementless femoral implants. Mark Rickman and Tony Ward presented on acetabular fractures.

Tony Ward, Fares Haddad and Matthew Burwell moderated the final session of the first day where radiographic problem cases were presented. The participation of the audience was energetic and enthusiastic.

During the session ‘Problems and Solutions’ Luigi Zagra and Robert Spencer addressed the significant issues of dislocation and heterotopic ossification respectively. David Woodnutt challenged the use of the traditional femoral implant, identifying the unique advantage of a short stem as the primary femoral component in total hip arthroplasty.

I moderated the final session of the meeting ‘Provisions for Revisions’ where revision of metal on metal implants and modular femoral implants were discussed by Jeremy Latham and Theo Karachalios. Peter Howard presented in support of cementing in revision arthroplasty and confirmed highly satisfactory long-term outcomes with technique dependent impaction grafting. Fares Haddad discussed the important considerations necessary to perform revision hip replacements in young adults. Rudolf Poolman discussed salvage for infection; both audience and faculty agreed that this procedure was not only technically difficult, but should not be performed by junior doctors in the dead of night or at the end of a theatre list.

Throughout the meeting all topics were the subject of lively debate until all questions had been answered.

I am grateful to Jri Orthopaedics and all the other sponsors for continuing to support this prestigious international meeting. I would like to express my grateful thanks to David Penford and Mark Janes of Clockwork Marketing and Events and Richie and Adam (sound and vision). Thanks must also go to Sue Misir, as well as Grace and Anna from The Marriott Hotel.

The plan is to continue evolving the bhac meeting aiming to meet the expectations and requirements of the delegates who have an interest in extending their knowledge, whilst at the same time having the opportunity to debate and discuss any issues.

Hopefully our delegates left the meeting satisfied but with an eager attitude to learn more in the ever-changing world of hip surgery!