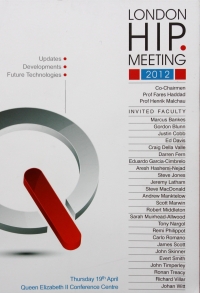 Professors Fares Haddad and Henrik Malchau brought together a superb international faculty for this one day annual London Hip Meeting.

The faculty provided short concentrated lectures to the delegates to emphasise the key points covered by the sessions at this well supported meeting.

I presented on the 15 Degree Face Changing Cup for Acetabular Dysplasia, which is used in patients undergoing total hip replacement for osteoarthritis secondary to a shallow acetabulum. The rationale of this unique design is to gain bony cover and support for the acetabular shell and at the same time optimise the inclination angle for the bearing surface. This is achieved by orientating the liner at a 15 degree closed inclination angle relative to the shell. In my lecture I discussed the different techniques of acetabular reconstruction and the published results, as well as the issues facing the surgeon in relation to the bearing surface, design of the implant and long-term biological fixation. The surgical technique for inserting this cup was demonstrated and it was identified as a useful alternative to standard cementless acetabular cups.

The lecture on the 15 Degree Face Changing Cup received a lot of interest from the delegates and produced an excellent response during the discussion session.

My second presentation in the Metal on Metal session was on 28mm Metasul MoM Wear Mapping . This research underpins the studies performed on the explants to understand what parameters determine the success or failure of Metal on Metal (MoM) bearings. The wear mapping is also used to analyse what factors might trigger adverse events with this type of bearing surface.

Adverse wear patterns were identified, in particular 'polar stripe wear' with impingement of the neck on the rim of the cup. These adverse effects were identified with high magnification photography. Small head explants were compared with large head explants to assess the different effects on the area of wear damage.

This lecture highlighted the well-published problems noted at the Bristol Hip Arthroplasty Course (BHAC) in 2010 and 2011, which led to a medical device alert by the Medical and Healthcare products Regulatory Agency (MHRA) on 28 February 2012. Further action was recommended to put systems in place for the follow-up of patients implanted with MoM hip arthroplasties.

MoM implants were discussed in the British Medical Journal, published on 13 April 2012, and have been subject to scrutiny in the media over the past few months.

This meeting certainly emphasised the need for the ongoing in-depth studies, which may in the future shed light on this interesting and intriguing subject. I look forward to next year’s meeting.