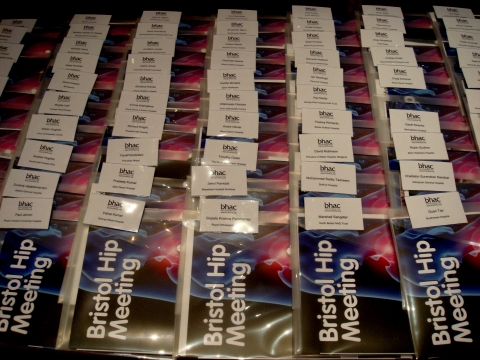 This year’s meeting transferred across the city, from our usual place at The Bristol Zoo, to the Bristol Marriot Hotel City Centre. This move was to accommodate the groundswell in delegate numbers and the ease of an overnight stay at the venue of the bhac (Bristol Hip Arthroplasty Course). The meeting was a great success and was warmly received by both faculty and delegates.

The Royal Cornwall Hospital consultants Darren Fern, Mark Norton and Dan Williams provided the delegates with an evaluation of ‘new pathology’ in the pre-arthritic phase in the hip joint, the options for acetabular reorientation, the influence of acetabular morphology in association with pelvic and acetabular fractures, and they also reported on an online patient evaluation system.

Leo Massari (Ferrara University, Italy) noted the osteogenic response of titanium acetabular shells in a densitometric patient study. There was an up regulation of the osteoblastic cells in response to the titanium metal.

Tom Donaldson (DARF, Loma Linda, USA) informed the audience of his outcome using the anterior supine approach to the hip in his first 209 patients.

Jeremy Latham (Southampton) held everyone’s attention with his presentation ‘Sex after hip surgery – are patients getting what they want?’ His unit has performed a detailed analysis on this subject and provided the attendees with data showing that osteoarthritis of the hip had an impact on sexual activity and that there was an early return to a ‘normal’ sex life following total hip arthroplasty. He presented this talk in a tasteful but very witty manner!

The infected hip can be dealt with in a one stage exchange, as described by Thorsten Gehrke (ENDO-Klinik, Hamburg) and the concept was to obtain a high level of concentration of antimicrobial agents at the site of infection. The treatment can also be performed in two stages, as favoured by Ian Stockley (Sheffield) with radical debridement and removal of the prosthesis and then returning at a later stage to perform re-implantation of a hip prosthesis. The principles of these techniques were emphasized, in the management of peri-prosthetic infections by Peter McLardy-Smith (Oxford).

The problems facing the revision hip surgeon are damage to soft tissue, impaired blood supply, bone defects and extended duration of surgery on the infected hip, not unlike facing a Metal on Metal (MoM) bearing surface at revision surgery. At the 2010 meeting, the audience was introduced to the problems with MoM hip implants. This year, the meeting focused on the wear of the bearing surface of MoM resurfacing arthroplasty and total hip arthroplasty (THA), as well as the problems of corrosion at the trunnion femoral head junction and the management of this significant problem.

Jeremy Latham’s other podium presentation focused on MoM hip implant revision surgery and provided the audience with insight into the timing of re-do hip surgery in these extremely difficult cases.

Cardiff consultants Alun John and Steve Jones, presented on the usefulness of testing for metal ions in patients with MoM hip implants, and their response to the ASR implant recall in their patients with adverse tissue reactions.

Alister Hart (London) identified that blood tests for metal ions (cobalt and chromium) have been used to investigate MoM hip replacements, but their ability to discriminate between well-functioning and failed hips is not known. The London Bearings Group performed a controlled study and concluded that if they applied a cut-off level of 7 parts per billion, then the maximum of cobalt or chromium gave a sensitivity of 52% and a specificity of 89%. A lower cut-off level increased the sensitivity (ability to identify failures) but decreased the specificity because more well-functioning THA’s will have levels above this cut-off.

In David Langton’s (North Tees/Newcastle) presentation he commented that, in his opinion, all patients should undergo cobalt blood tests, and that 10ug/l identified ‘a good chance of an adverse tissue response’.

We were delighted to welcome our colleagues, Tom Donaldson and Ian Clarke, from across the pond! Tom Donaldson gave a detailed review of the M2a38 MoM bearing surfaces, which to date, had not required revision surgery for Adverse Reaction to Metal Debris (ARMD). He and his research partner, Professor Ian Clarke from DARF, Loma Linda, demonstrated wear patterns on the bearing surfaces and contrasted small diameter Metasul implants with large diameter MoM total hip arthroplasties, and debated why wear damage was so consistent in large diameter MoM hip implants. Ian showed how he mapped the surface damage on MoM implants in simulating a normal functioning total hip replacement. The smaller sized femoral heads show less area of wear in comparison with the larger explanted femoral heads. This original concept was presented for the first time at The Bristol Hip Meeting. Ian was able to identify wear zones in the acetabular cups and femoral heads, as well as areas of abnormal wear and damage to the surface of the hip joint.

David Langton focused on the plastic deformation of the ASR XL bore within the femoral head and highlighted the imprint made by the trunnion. He noted the increased wear at the base of the bore. He informed the faculty and the delegates that the volumetric wear rate was less in the MoM THA’s than in resurfacing hip arthroplasty. The volume of the taper wear is small but possibly initiated a more aggressive biological reaction.

Tony Nargol discussed ‘Investigation and treatment of patients with ARMD’. His presentations encapsulated all the experience that he and David Langton had gained with the MoM bearing hip practice in North Tees/Newcastle. He commented that we should remain aware of this problem in all MoM implants and that the presentation of symptoms should alert the orthopaedic surgeon to the possibility of an adverse tissue reaction. Given that in the past 12 months surgeons from the United Kingdom have published on this problem he could now tell the audience that it was possible that the Pinnacle/Corail 36mm MoM appeared to be a problem in his unit, even though it was still early days. He alluded to cup inclination, size of femoral head and various brands of prostheses. He stated that the MoM THA was a far bigger problem than resurfacing arthroplasty. The findings in Tony’s unit identify a problem, the incidence of which has not yet been established, either in the United Kingdom or abroad.

I would like to express my thanks to David Penford and Mark Janes, Clockwork Marketing and Events, for taking the meeting to a new venue whilst maintaining the efficiency and smooth running of previous meetings.