'Brave New World' 8-9 November 2007 The annual Bristol Hip Meeting, sponsored by Stryker was held in the Clifton Pavilion at Bristol Zoo, perhaps a fitting place for orthopaedic surgeons to have their meeting!

The annual Bristol Hip Meeting, sponsored by Stryker was held in the Clifton Pavilion at Bristol Zoo, perhaps a fitting place for orthopaedic surgeons to have their meeting!

The Faculty dinner took place on Brunel’s S.S.Great Britain and we were told by ‘Bob’ that around 160 years ago the ship was ‘the state of the arts in travel’, the first to have an iron hull and screw propeller. The meeting entitled ‘Brave New World,’ debated cutting edge technology and progress in orthopaedics and health care, 164 years on. One delegate, Robert Jones, has attended all 12 Bristol Hip meetings. 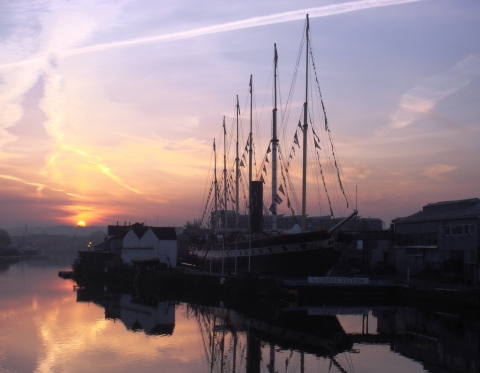 The meeting started with a lecture on modern medical health care. It was identified that the NHS is a state funded, mixed economy with patient choice, diverse providers and the money following the patient. The new challenge is an 18 week interval to elective surgery by 2008.

The changes in response to a new Prime Minister were seen in the interim report, ‘Our NHS Our Future.’ This summarised the aims of the NHS and the Comprehensive Spending Review confirmed that spending will increase by a real 4% by 2010-11 (although the Wanless Report recommends a 4.4% increase to maintain the service). The report identifies the need for value for money in improved GP access, cleaner hospitals and better social care. However, at the same time hospital productivity has decreased.

The well-known model of health care delivery has undergone radical changes and with Professor the Lord Darzi identifying a more flexible approach to surgical management, it is more than likely that a great proportion of health care delivery will be performed outside a traditional hospital setting. Payment by Results (PbR’s) will focus on the individual patient experience with quality of care at the centre of the NHS framework. But the question was asked: ‘Are the political masters really interested in quality of care, or are they only interested in an increased throughput of patients at a reduced cost in an era when spin can always disguise the real facts?’ It is well known that ‘Failing organisations are overmanaged and underled.’

The crux of the debate was that hospital specialist doctors would be required to actively engage in leadership and the management process to support their hospital. The widespread gloom in the hospital service was noted. Sandie Foxall-Smith, Director of Medical Strategy for Circle (formally known as Centres of Clinical Excellence), www.circlehealth.co.uk discussed the influence of the Primary Care Trusts (PCT’s). The changing public expectation, demographics as well as technological advances were cited as the drivers for change in patient care. This allowed Ashley Blom, Senior Clinical Lecturer and Head of Orthopaedic Surgery, University of Bristol www.bris.ac.uk/clinicalsciencenorth/orthopaedics to provide the audience with details of the shift in demographics. Are we surprised that we are better educated, living longer, but getting fatter and suffering from diabetes with increasing frequency? At the same time we are participating in more sport! Patients have increased expectations in a world where more elective Total Hip and Knee Arthroplasties are being performed. By 2030 it is predicted that the number of these procedures will have increased by 175% and 670% respectively!

Peter Kay introduced the delegates to the allocation of funds for activities undertaken and specifically the costs and reimbursement of hip surgery. Payment by Results was introduced in 2002. A national tariff was set up for hospitals to charge PCT’s per treatment. Over 90% of hospital activity will be funded this way in 2008. He identified some of the difficulties with poor documentation and coding, the complexity being such that this could indeed create a new career pathway within the NHS. Healthcare Resource Group (HRG) Codes G4 will be introduced as the currency for the national tariff for 2009/10 with the hope that this will allow better differentiation of routine and complex cases.

I presented on ‘Resurfacing of the Hip’ emphasising the need for careful patient selection, a learning curve and surgeon experience in performing this technically demanding procedure. The problems of femoral neck resorption, fracture and avascular necrosis of the femoral head were noted. There are now numerous resurfacing implant designs on the market. The majority are used throughout the United Kingdom and Europe. The controversial issues of metal ion toxicity, metal sensitivity, teratogenicity and carcinogenesis were discussed. The Federal Drug Administration (FDA) in the United States of America has approved the use of a few Resurfacing Arthroplasty (RA’s) implant designs. An increase in the use of this implant is anticipated but given that big head technology is available with use in hip arthroplasty it is unlikely that there will be the predicted explosion of resurfacing of the hip in the USA.

The topic was discussed in the New York Times in an article on the 14th April 2007 entitled ‘Hip Surgery with a future – Resurfacing Arthroplasty’ by Barnaby Feder.http://nytimes.com/2007/04/14/health/14hip.html

My co – coordinator Tony Ward gave an excellent presentation on leg length discrepancy following Total Hip Arthroplasty. This complication is the most common cause of complaint and Tony identified all the pitfalls and means to reduce this complication. His talk was followed by Julie Wells who gave some insights on the factors affecting the range of motion of the hip.

Ricky Villar provided the delegates with a comparative study between cementless, hybrid RA’s and metal on metal total hip arthroplasty.

A conservative alternative to total hip replacement – a ‘stubbie’ – designed by Richard Field was enthusiastically presented as a new alternative to the already crowded and experimental ‘stubbies’ implant market.

We were made aware of problems which can occur when the immune system reacts to the presence of a hip implant causing an inflammatory reaction and presents as a syndrome described as ALVAL (aseptic, lymphocytic vasculitis and associated lesions). This was presented by John Nolan.

The feedback from the delegates was that the meeting was a success. On a personal note I thoroughly enjoyed the interaction between the faculty and the delegates.